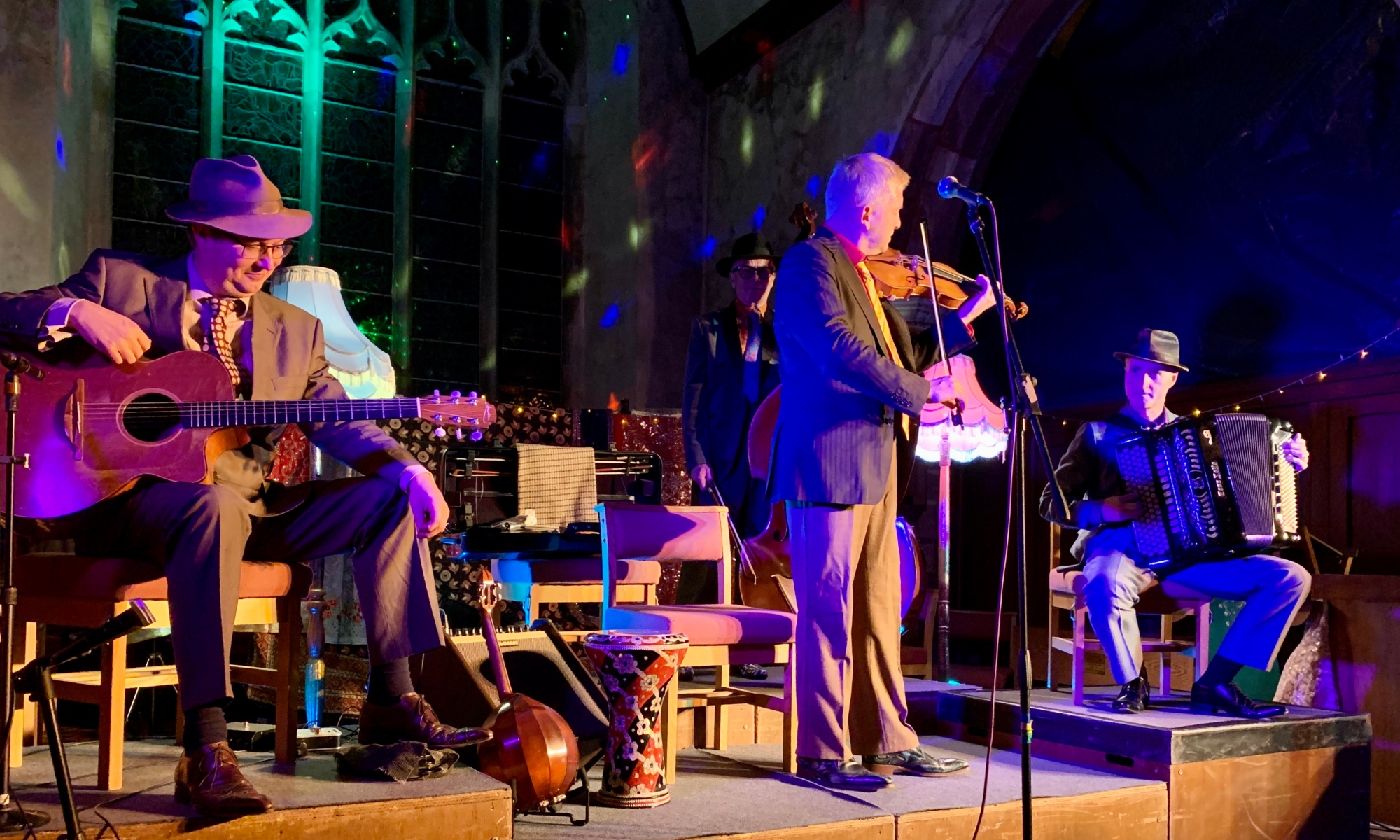 A PAGE FROM MY DIARY

I had no cash. Normally not a concern as I use the watch to pay for just about everything. But I would need a beer or three in the Dewdrop and I would need to pay Sarah for my Budapest Cafe Orchestra ticket: neither takes watch! I was due to meet Scotty and Sarah in fifteen minutes; did I have time to get to the Tesco Metro ATM and back to the Dewdrop for 6pm? Answer not needed: I had to have cash. It was better to be a bit late than cashless.

Ordered a Doom Bar with a minute or two to spare. Ben was at the bar (did I have the right night? Ben is Monday and Thursday. No, this was definitely Tuesday; everything’s alright with the world). Arrived in Kingskerswell in time for a pint at the Lord Nelson then off down to the church. Second oddity of the night: first I needed cash (unusual) and now off to church for the second time in a month (weird).

This church makes a great venue with good acoustics, twinkly lights everywhere and a great atmosphere; surprisingly homely given all the stone and wood and slightly down at heel look of the church, aided by frilly Miss Marple floorstanding lamps and glittery new-age fabric backdrops.

With a name like Budapest Cafe Orchestra it was pretty obvious we were in for something unusual and interesting; music from the balkans with a gypsy flavour. The instruments spread out across the stage provided confirmation; accordion, acoustic guitar, violin and double bass were familiar, less so were what we later learned were a balalaika and a darbuka. I was quite surprised to see the darbuka; I’d seen it played by African musicians, probably in the heyday of the Africa Centre in Covent Garden in the 80’s. Turns out it was (is?) popular in North Africa, the Middle East – and eastern Europe.

There is a risk that evenings like these can be a bit too serious and a bit dour – with a tinge of musical and cultural snobbery. Not so here! The instant the band introduced themselves any such thoughts were drowned in a pool of humour; not so much Cafe orchestra as Bar orchestra. This was Balkan and gypsy music by way of Harringay in London (Green Lanes I later learned) starring Balkan Bob, The Dragon, Kelvin the Klaw and The Sultan. The Dragon played the enigma machine (funny, it looked just like an accordion to me). Kelvin the Klaw was on the ‘big daddy violin’ and The Sultan was on the guitar, saz and balalaika and, we learned, had a certain amount of yer actual Russian blood – which he kept in a vial on a shelf in his living room.

Needless to say, this was a very entertaining evening with the music flowing from humorous to outright funny and from sad to film noir cinematic. The musicianship was top notch with the interplay between the fiddle and the enigma machine especially mesmerising. At one point you could tell which was which, but then without warning you were not aware which sound was coming from the fiddle and which from the accordion; they were dancing around each other and sometimes merging in an almost sensual embrace. The ‘duelling banjos’ battle between the fiddle and the accordion was particularly entertaining – both humorous and clever. I say fiddle but Balkan Bob was clearly an accomplished (and probably classical) violinist.

This venue has a tradition of a ‘cake intermission’ half way through a set. Home made cake is offered for sale, and I’m told it’s very good. Tea and cake sounds awfully English but, I wondered, might this not also happen in a cafe in Budapest? Had this been any night than the one before root canal surgery I would have taken along a bottle of Bulgarian red and thoroughly enjoyed it. The beauty of this venue is that you bring your own booze, and many people did.

It was all over too soon but the saving grace was that I had time for two more pints back at the Dewdrop, and time also to reflect: why were there not evenings like this in Newton Abbot when I was a teenager? And perhaps more to the point, why were there so few people under the age of 40 at the gig tonight? The simple answer is, folks need to get out a bit more to experience the real world….

This site uses Akismet to reduce spam. Learn how your comment data is processed.